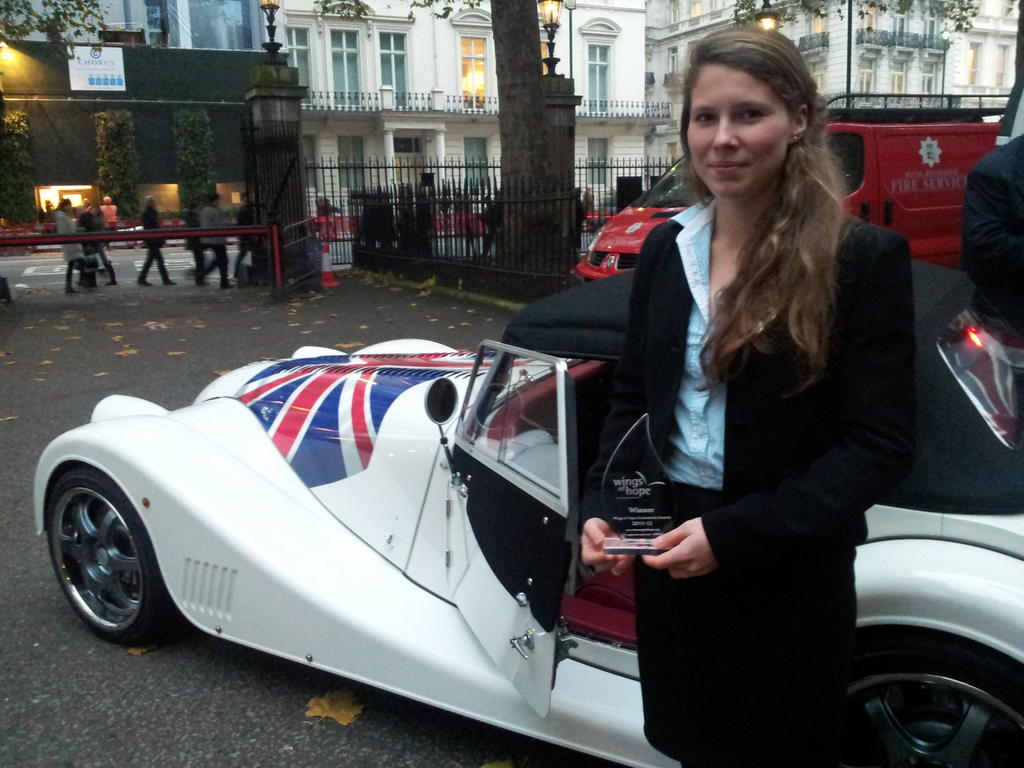 On Friday 16th November 2012 WOHAA winners Team Aquila took up Her Majesty’s kind invitation to attend Buckingham Palace to personally present a Diamond Jubilee card and mementos from their home town of Malvern to celebrate the occasion.

The Sixth Form students, Alice Quinn, Holly Makin, Rebecca Connell, Rebecca Raby-Smith, Jess Coulman and Amy Cooke – collectively known as team ‘Aquila’ – are from Malvern College and had been fundraising for the Wings of Hope charity through a fundraising competition, ‘The Wings of Hope Achievement Awards’ (WOHAA). Team leader Rebecca Raby-Smith was elected by her team mates to deliver the A3 sized signed card and a unique jeroboam of Hollywell Malvern Spring Water, both arriving in a Morgan car, to Her Majesty. Wings of Hope Co-founder, Dr Sri Ram, and Smruti Sriram, the creator of WOHAA, were also in attendance.

Team Aquila took part in WOHAA 2011/12 by conducting a range of fund and awareness raising activities. They participated in ‘Santa’ and mud runs, donated profits from a baby-sitting service and sold Wings of Hope wrist bands, as well as conducting the Diamond Jubilee project. Their Jubilee work involved the students organising for their fellow students and members of the local community to sign a card for Her Majesty, gathering over 2,000 signatures in total. To achieve this they managed to secure a table in a local supermarket foyer, collecting signatures for the card and donations for the Wings of Hope at the same time. They also convinced a designer to help them create the card and a local printing company to sponsor its production. Most impressive of all, they approached Morgan Motor Company and Holywell Malvern Spring Water – both being institutions synonymous with their hometown of Malvern – who donated a car to be used for the presentation and a specially-designed bottled gift, respectively. The team’s effort and dedication were outstanding and their commitment meant that they won ‘The Most Awareness Raised’ Award through WOHAA.

On the day of her visit to the Palace, Rebecca was chauffer driven in the Morgan – from Malvern to London – where she met with the Wings of Hope team at the Royal Automobile Club. All commented on what an amazing sight it was to see the car driving through the Palace gates, before Wings of Hope and Rebecca met with Chief Clerk, Christopher Sandamas. Rebecca expressed her hope, on behalf of team Aquila, that Her Majesty ‘enjoys the card and water- it comes with enormous thanks from everyone in Malvern for everything that she has done for us over the last 60 years.’