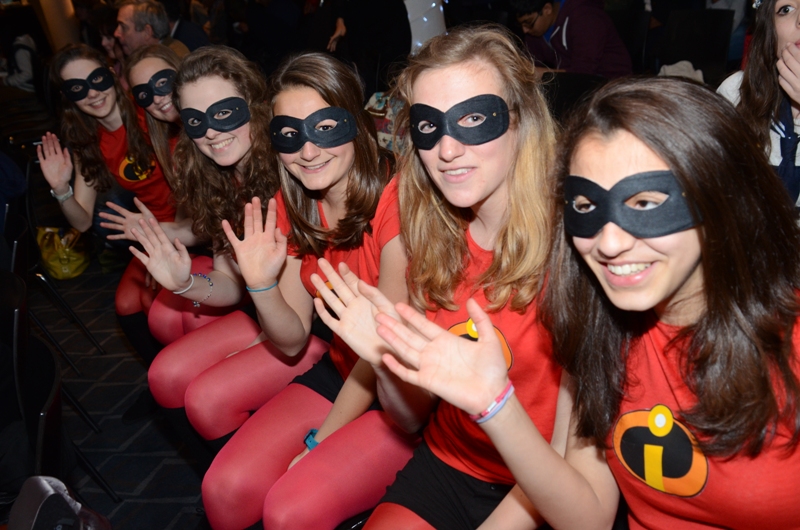 Wings of Hope Achievement Award (WOHAA) participants celebrate in style at the WOHAA Award Ceremony 2012 hosted by the Wings of Hope at Wembley Stadium.

On the 19th of April 2012, 700 students from different schools attended the WOHAA Award Ceremony 2012 at Wembley Stadium. This years theme was ‘Heroes and Heroines’ and students did not fail to deliver some amazing costumes in order to represent their favourite hero or heroine.

Dr Sri Ram (CEO & Co-founder Wings of Hope) and Rajni Sriram (CEO & Co-founder Wings of Hope) hosted the evening at Wembley Stadium where every student who participated in the Wings of Hope Achievement Award this year was recognised and rewarded throughout the evening for all their efforts and hard work. The 32 teams that had got through to the semi-finals at the House of Lords waited with anticipation as Babita Sharma (BBC World News Presenter) opened the ceremony. Throughout the ceremony Babita kept the audience entertained as everyone waited in anticipation to see which teams would win an award.

Teachers, corporate partners: Arup, Capco, Tata Consultancy Services Ltd, supporters: Baroness Verma, House of Lords, Loveable Rogues (Musicians: Eddie Brett, Te Eugene, Sonny Muharrem) and MP Barry Gardiner – Brent North amongst others, also attended the event and were overwhelmed by the achievements of the students and by how much they had been able to accomplish throughout their WOHAA journey.

Guests commented on the event:
‘It was an absolute delight to be there yesterday. The students have been brilliant and I really cannot wait to meet all of them and have them for our work experience’
Nupur Singh & Anshu Kapoor, Tata Consultancy Services Ltd.

‘It was a great pleasure to see such fantastic talent, well done for this wonderful vision, our very best wishes to you all’ Baroness Verma, House of Lords.

‘It was a lovely evening. I’m so pleased I was able to be there for the award. I was also pleased to see how many other students from Preston Manor came along’ Ms Wilding (Preston Manor School).

‘We have lots of charities that we support at Malvern College but I was looking for a particular charity that would offer the pupils the opportunity to develop skills and that’s certainly what’s happened, they’ve learnt so much’ Ms Godsland (Malvern College).

Loveable Rogues, a new upcoming band that will be taking part in Britain’s Got Talent also wowed the crowd with their fresh talent and original songs. DJ Harrybo (previous resident DJ at Ministry of Sound) closed the evening by playing some amazing music for all the students to dance to.

Innovative student entries from this year included: a world record 61 hour radio show, a walk around the monopoly board, creating a signed birthday card for the Queen, Fashion Show, Golf Day and much more.

The overall winning team will receive an all expenses paid trip to India to see first-hand how the money they have raised provides and maintains the education of disadvantaged children. Winners will receive unique and valuable work experience placements with selected corporate partners including Saatchi & Saatchi, Edelman, Tata Consultancy Services and CAPCO.