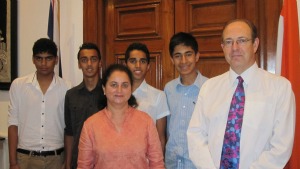 Sir James Bevan was appointed British High Commissioner in 2011. He has worked in a wide range of political, security, economic, development and other issues.

The boys from Merchant Taylors’ school, North London along with the Wings of Hope co-founder Rajni Sriram were invited to Sir James Bevan’s residence in Delhi. Here they enjoyed sandwiches, biscuits and tea. It was a very privileged opportunity to meet with Sir James Bevan, to hear about the work he does.

Sir James Bevan remarked on Twitter how inspirational it was to meet with the winners.